‘Bright Futures’ began as a small charity in 2007. It was created by a group of parents who were seeking improvements to the quality and range of services for children with autism.

In March 2010 Bright Futures secured a ‘start-up’ grant with which to develop ‘special school’ provision in partnership with Saddleworth Preparatory School but when that school closed a few weeks later it became necessary to start from scratch.

We were fortunate, in August 2010, to find  premises in Grasscroft. In March 2011, the new school underwent a successful ‘material change’ Ofsted inspection with the outcome that Bright Futures School was registered with the DfE as a special school for children with autism.

Operating with only one pupil from September 2010, then with only two from September 2011 resulted, by March 2012, in the Charity running up unacceptable debts. At that point the school was taken on by two of the charity’s Trustees as ‘Bright Futures School Limited’ operating as an independent special school with the support of HSBC bank loans.

The school survived.. and is now firmly established with  14 pupils funded by Oldham, Tameside, Calderdale, Kirklees, and Rochdale Councils, 20 well qualified full-time and part-time staff.. and Flynn, Breeze and Molly, our part-time dogs!

We Are Providing an Environment for Our Students to Grow & Excel

In February 2020, we moved into our new school in Greenfield, purpose built especially for Bright Futures School and financed by local company Robert Scott and Son.

The school is on one floor and consists of 16 dedicated classrooms, ideal for 1-1 work. There are two dining areas where pupils meet and eat together at break and lunchtimes, plus a kitchen area suitable for cooking sessions.

We are fortunate to have a workshop suitable for craft and design / upcycling activities plus an interactive sensory room for pupils to chill and calm if feeling anxious or dysregulated.

Reception is the hub of the school and close by are the staffroom as well as the school office where Zoe and Alison can be found along with Molly and Flynn, our school dogs!

In addition, we have plenty of toilets, a shower room, utility area and a medical room.

There is plenty of space outside for pupils to relax as well as engaging in gardening type activities and we hope in the future to acquire play and fitness equipment of a sensory nature.

We are delighted to have a truly stunning building that offers so much space, in such a calm and peaceful environment! 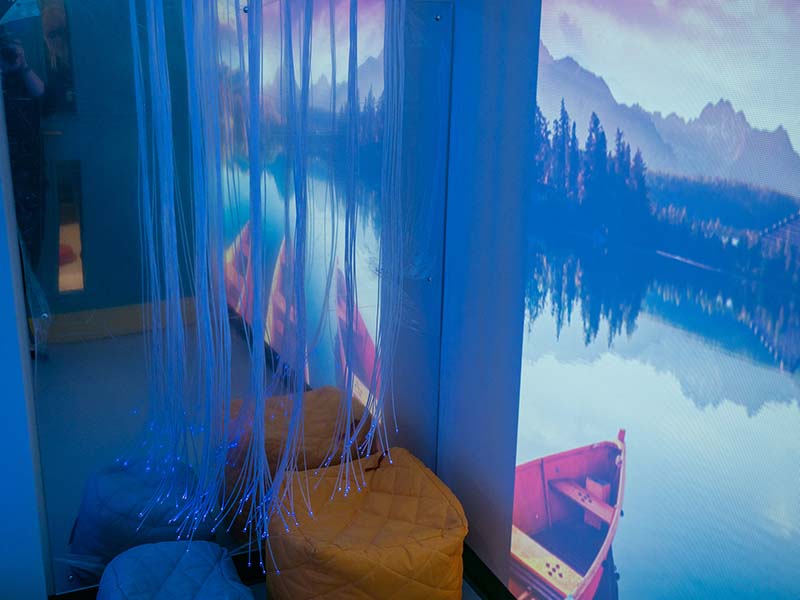 Zoe Thompson, Proprietor, (BA Hons – Social Policy and Administration) is Head of Development, with responsibilities for staff training, the personal development curriculum, liaison with parents and outside agencies. She has a background in health education. As a fully qualified RDI® (Relationship Development Intervention) Consultant, Zoe uses her knowledge and experience of RDI® for the benefit of pupils at the school.

Alison Hughes (B Ed, NPQH) is Head of Learning, with responsibilities for the deployment and support of teaching staff, the academic curriculum and the development of personalised timetables for individual pupils. Previously, a Deputy Head Teacher of a local authority special school, Alison now uses her experience in developing, organising and implementing the Bright Futures School curriculum, assigning staff to work 1:1, and in assessing and tracking pupil progress.

Lucy Andrew (NVQ Level 2 & 3 Childcare, Learning and Development and BTec Diploma Art & Design) has, for many years, worked as a Learning Support Assistant in a mainstream school, working with children with autism on a 1:1 basis. Lucy has completed many courses which will help her in her role as Learning Mentor Assistant at Bright Futures, such as Level 1&2 Working with Autism, Lego Therapy, Phonics, Time to Talk and Word Finding Difficulties. Lucy will also use her creative and artistic flair when working with pupils at Bright Futures School.

Karen Croft (T.A. Level 2) arrived at Bright Futures as a volunteer but is now an important member of our team of Learning Mentors. Karen makes a leading contribution to our PSE curriculum as well as delivering the ASDAN Cope award to our older pupils.

Rosamund Hayes (has a plethora of qualifications including Effective Listening Skills, PTLLS, Health Improvement) and has an extensive background of working with young people including youth volunteering, special constabulary and restorative justice panels for Children’s Social Care. Her vast career has evolved over the years and latterly as a mentor and tutor for Rochdale Connections Trust. Ros has specialised in dealing with mental and social issues of young people and will now be using her nurturing, supporting and coaching skills in delivering a range of activities in her role as a Learning Mentor at Bright Futures School.

Hayley Coupe (BA Honours English, PGCE, QTS) has taught in both mainstream and special school settings since completing her Postgraduate Certificate in Education. Hayley is an Early Years Specialist who has used her knowledge of early development to support many children with complex needs, including autism, during her time as a teacher. Most recently Hayley delivered an award winning sensory program to young children and now uses her experience, knowledge and creativity as a Learning Mentor at Bright Futures School.

Helen Williams is a former owner and manager of a local private day nursery, with 29 years experience in managing staff and children. Helen has had experience with many children with Autism over the years and has worked with the local authorities to get EHCP plans for funding to be in place for children starting reception.  Her Qualifications include: NVQ level 4 in childcare and education, Level 3 A1 Assessors award for students working in the workplace, SENCO training, Paediatric first aid, Safeguarding and safer recruitment. Helen joined BFS in September 2021 as a part time Learning Mentor.

Lindsay Bosson has worked in a wide range of mainstream and SEND settings over the past decade, including teaching placements in China and India. She uses her passions and expertise in music and crafts to encourage and develop creative skills in individual pupils and is one of our newest Learning Mentors. Lindsay is currently studying part time towards a MEd qualification in Inclusion and SEND, with a specialism in autism in children.

Carolyn Robinson has worked in special needs for many years. She has been involved in community projects and educational support. Carolyn has a degree in Learning difficulties and a post graduate certificate in SPLD (dyslexia).

Claire Upton (BSc Honours, PGCE, QTS, MA Inclusive Education) is a fully qualified teacher with over a decade of experience working in a range of mainstream and special school settings. Claire has worked with many children with a range of needs, including Autism and is now bringing her knowledge and experience to the Bright Futures Team. Responsible for supporting the delivery of a range of curriculum based activities for pupils, Claire will now work to provide further creative learning opportunities within the ethos embedded at Bright Futures School.

Lisa Rigg (N.N.E.B and HLTA) has over 10 years’ experience working with children with complex and profound difficulties, including autism. She now brings her knowledge and experience to the Bright Futures team as a full time earning mentor. In September 2021, Lisa became a middle manager taking an  overview of the curriculum for younger pupils, as well as having a leading role in support of pupils’ EHCPs.

Lauren Tomlinson (Level 3 in Education and Training) has previous experience working with children and young adults with mild, moderate and severe learning disabilities, including autism. She has qualifications in health and social care, and health and safety, including first aid.

Molly Walker completed her Apprenticeship at Bright Futures School and is now working with the team of Learning Mentors in a supporting role.

Molly is currently on maternity leave and has been replaced by Helen Savage.

Alex Wood (PGCE) spent 14 years teaching painting and decorating at Oldham College at pre-entry level. Prior to that, he worked for Oldham Council. Most recently, Alex has been working as a Personal Assistant for a local gentleman with autism and he’s now using all his experience as a Learning Mentor within the Bright Futures team.

Polly Sharrock (Supporting Teaching and Learning Level 3) Polly recently completed her qualification in teaching and learning and is currently studying for a level 2 in autism awareness. Polly has classroom experience from her time volunteering at a local primary school and works in class four days a week as a learning mentor. Previously Polly had a long career in banking covering many roles in retail and commercial.

Sam McManus ( BSc Honours) has worked as a volunteer in a local mainstream primary school and studied a range of science and primary education modules as part of her degree. She is bringing her classroom experience and science subject knowledge to her role as Learning Mentor at Bright Futures School.

Jayne Kennedy (BA Children & Young people) supports the staff in school, keeping everyone happy at break and lunchtimes, as well as covering for staff in sessions with pupils.

In Memory of Dixon Milburn

Dixon was highly instrumental in preparing, planning, implementing and giving on-going input into Bright Futures School, as a co-founder with Zoe. Dixon, although often in the background, was also a silent driving force within the efforts to get RDI recognised as an educational intervention within the UK. He always had words of wisdom and knowledge to impart and gave great support to Zoe in all her endeavours.

Those that knew Dixon state he was a ‘very nice man’. Bright Futures School staff capture Dixon’s essence ‘he will be remembered for his dry sense of humour, his patience, calmness and kindness, a genuinely lovely man who was never flustered, always had a quirky tale to tell and offered brilliant support’.

Those whose lives were touched by Dixon truly miss him. Dixon’s legacy lives on within the work that continues to help children and young people with autism at Bright Futures School, within Zoe’s ongoing mission to raise the RDI profile within in the UK and through his sons Philip and Louis.

We have now raised enough funds and have had our  outdoor sensory gym installed. Please click on the link below if you would still like to  make a donation through Go Fund Me, or contact the school for more information about our next fundraising project.

Thank you for your support.